The Swiss in South Indian sericulture - 2 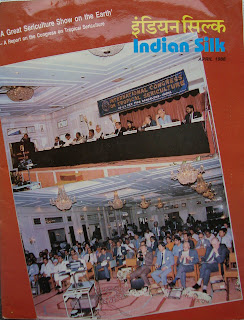 By 1988 a National Sericulture Project (NSP), to be again funded chiefly by the World Bank, was nearing agreement. This was being established not by any State Department of Sericulture but by the Central Silk Board, a semi-autonomous body under the Government of India’s Department of Textiles but based in Bangalore where the State Department of Karnataka also had its headquarters. CSB had been in indirect touch with SDC for a decade by then, as the owner of CSRTI and its SDC-supported ICTRETS in Mysore. It was in effect the manager of the new mega project agreed in 1989. It would control the World Bank’s funding, the crucial lifeblood of all such projects, on its route via the Government of India to its own subordinate institutions, both those already established and the new ones to be created, as well as through State governments to their own Departments and other institutions. Into this large and already complex set-up, SDC entered with its own concerns, values and plans. In funding and oversight, it would be a partner, inevitably minor, of the World Bank; in management it was the CSB of which it would be an uneasy partner.

In February 1988, with negotiations going ahead, the CSB lavishly hosted, over five days in Bangalore, the International Congress on Tropical Sericulture Practices. Inevitably, the majority of participants came from India, and within India from Bangalore itself, but 23 other countries were represented, some with substantial delegations. Japan, with 11 participants, mainly with commercial affiliations, was prominent; China had sent 6 academics and officials. SDC, joint host for the event, was represented by Dr R. Hager, its Deputy Regional Programme Co-ordinator, and Mrs Nalini Singh, the Programme Officer, both from the Swiss Embassy in New Delhi.

Plenary sessions opened and closed the Congress, and between them were five substantive sessions, of which the first was on Sericulture and Rural Development. Dr Hager was its Vice Chairman and it was here that Nalini Singh presented SDC’s own paper. The prominence given to such a topic was already a marked innovation for a sericultural conference. The usual and more technical sessions were on Moriculture Practices, Silkworm Rearing Practices, Silkworm Seed Production, and Reeling and Processing. There were numerous papers offered for each, ranging from 26 for mulberry and its cultivation – moriculture - to only 11 for the extensive but far less researched post-cocoon fields: reeling, further processing of the raw silk yarn, and weaving. There were contributions from across the sericultural world, as well as a mass from India itself (CSB 1991).

The paper contributed in the first session by SDC’s Regional Programme Coordination Office was itself distinctive. Unlike most throughout the Congress that took for granted in reporting research findings and reviewing achievements the desirability of sericultural development, SDC’s paper was already and characteristically self-questioning. It was sub-titled ‘A development agency’s hopes and doubts about involvement in the promotion of sericulture’. It saw the Congress as ‘a timely occasion for taking stock of SDC’s activities in sericulture, given the presence of experts, managers, administrators and policy makers for deliberations and discussions on the role of sericulture in rural development’. It noted that this was also ‘the main focus of SDC’s activities in this field’ (SDC 1991/1988: 21). It presented 10 ‘hypotheses’, the first four on apparently favourable effects of sericultural development, the remainder, if they were true, pointing to effects which would be regarded, at least by SDC, as unfavourable.

I Sericulture development leads to improvement in the living standards of a large number of small farmers and landless families.

II Mulberry is an ideal crop for supporting soil and water conservation measures in a given area.

IV Sericulture has the potential to increase foreign exchange earnings of India.

Each was followed by a short discussion which included caveats. For the first, for example, it noted that it ‘might be totally or at least partly invalid if Government does not assist with schemes favouring small farmers and landless groups’. Here issues which would come to the fore a decade or more later were both foreseen and, in effect, discounted, at least for the time being. They wrote that if the ‘four hypotheses are valid, and the related conditions are fulfilled, we believe that sericulture development in India is compatible with our own development objectives and therefore justifies SDC’s involvement’ (SDC 1991/1988: 21-22).

The other six hypotheses referred to possible adverse effects. These were: first, for women in families, increasing the unpaid labour required of them, as well as weakening their position relative as increased cash income remained in male hands (V); second, for ‘resourceless households’, these might be further marginalised and exploited as disparities between themselves and the wealthy, able to invest, were increased (VI); third, a diversion of land from food to mulberry production (VII); fourth, making rural incomes increasingly dependent on unstable luxury markets for silk goods (VIII); fifth, mechanisation leading to unemployment of rearers, reelers and weavers (IX); and sixth, leading to mulberry monoculture and attendant dangers to both crops and soil in the long-run (X).

With hindsight, not all these potential issues look equally perceptive. They do, however, draw attention to the interaction of diverse factors that should ideally have been kept in mind if development were to be judged by the effects it could have for the society in which it was to take place. SDC had found in their experience of sericultural schemes that there was ‘a paucity of information and data’ which could bear on these issues. They wanted the CSB to develop a system to collect and analyse evidence in future and to make recommendations to ‘the various agencies concerned’.

The Rural Development session was well supported. It had attracted 15 papers and its discussions were extended to a concurrent session in the same afternoon. Such was the interest and enthusiasm generated by the day’s airing of topics that Dr Hager then proposed that the discussion be continued as a working party on the following day. This met with immediate agreement: Mrs Leena Mahendale, an interested IAS officer from Maharashtra, was elected to chair the working party, and Sanjay Sinha, a development consultant from New Delhi as rapporteur. The Working Group produced a concise and wide-ranging set of 7 recommendations ‘to all authorities and bodies concerned with the promotion of sericulture’. SDC’s spirit of questioning and its call to CSB itself to take up the collection of relevant evidence specifically on the potentially difficult subjects it had identified were, however, not taken up - and even they appear not yet to have registered that child labour was an issue. The Working Group’s recommendations also went beyond the SDC paper in the range of its topics.

Nevertheless there is little doubt that the SDC role in this first session and the Congress more generally had been a good deal more significant than the formal record of Proceedings (CSB 1991/1988) itself reveals. In any case, they were already yet more deeply involved with India’s sericulture. They decided, for good or for ill, to go along with the scheme the CSB was proposing: they would become partners in the National Sericulture Project. Their contributions would remain distinctive and they would prove challenging partners in the longer run too.