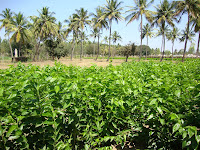 Since the decline of the Bengal industry in the nineteenth century, South India has been the home to the main and most successful raw-silk industry in India, providing livings for some 2 million people. India as a whole was, by the later twentieth century, second only to China in global silk production.

As an industry it is distinctive, being both science-based and located within peasant agriculture. It is rooted in the agricultural production of mulberry leaves, the food of the highly vulnerable and dependent silkworm.

This has meant that progress has always depended on scientific and technological experimentation and implementation, in insect and plant breeding and combating potentially devastating hazards of disease and climate.

It has required further processing to turn the silk filament into a raw material usable for weaving and able to meet standards required for changing uses.

In addition, its high cost and the high value of its product have given silk a unique and often problematic place in trade and finance.

Despite the economic and social importance of this industry and its evolution through the last two centuries, no serious attempt has been made to chart and assess the succession of development efforts to which it has been subjected in the period of momentous change since its beginnings at the end of the 18th century.

The socio-economic changes associated with liberalisation and increasing globalisation in recent decades have opened new opportunities but also confronted the industry with new challenges in pursuing the two-century-old goal of stable profitability and expansion.
Posted by Simon Charsley at 01:28